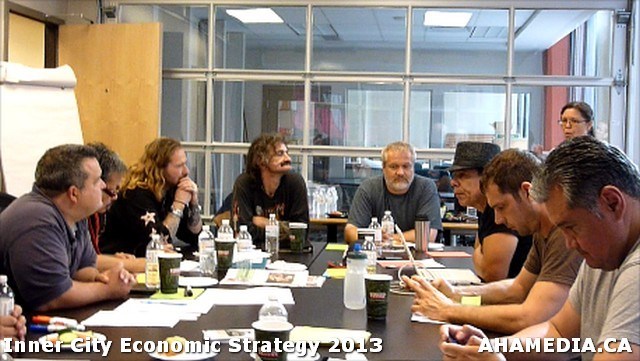 ALIVE recently organized and took part in the 2013 Inner City Economic Strategy (ICES) meeting with friends, partners and fellow community members. ICES 2013 was a time for sharing and collaboration and provided a community update on key community projects underway. Topics around the theme of sustainable, inclusive economic development included SFU’s 100 communities dialogue on economic development, the DNC Street market and ALIVE’s Salish Sea Civilization among many innovative ideas and projects.

Recent statistics tells us that 87% of the workforce in the DTES come from other communities. Hundreds of millions of dollars are leaked out of the community yearly. The City of Vancouver states they are committed to working with the local groups, families and individuals to foster an economically sustainable community, breaking down barriers and empowering vulnerable people. A procurement policy by the city could be used to leverage support for this. Currently, a large body of diverse groups (businesses, non profits and activists), including ALIVE, are working together to get some serious action with real outcomes.

On September 14, friends and partners of the the Inner City Economic Strategy gathered on the second floor of Woodwards for a community update on key projects that are currently underway such as SFU’s-100 communities dialogue on economic development, the DNC Street Market, and ALIVE’s Salish Sea Civilization Time. Attendees were given an opportunity to get informed and have their say on issues that affect Vancouver’s east side.

Here are some photos taken by AHA media